Over the last year, I have had the privilege of working with the greatest piano player I have ever had a chance to meet, Rick Zuccaro.  Ricky Z’s Facebook Page

He has put together a local ‘supergroup’ if you will of very talented musicians around the Utica NY area.  They started out working as a Tribute to Billy Joel Band, but now are moving in new directions with some original music.  Rick is very talented and puts forth a lot of effort into the project.  He has a studio in his basement where the band practices; and at his live shows he donates Yamaha Digital Keyboards to local elementary schools.  He believes in motivating and inspiring the youth to create a desire to learn about music.  It helps gets the creative juices flowing.

His live shows consist of him on piano and keys; drums, guitars, bass, harmonica, horns, and both female and male vocals.  His goal is to get it right.  He wants Billy Joel to see his work and be impressed.  The live show also consists of video projector screen on stage with the band.  The donation of the keyboards are drawings that the crowd participates in.  They vote for their favorite local elementary schools, and the kids in the crowd get to come on stage and pull the winners of the keyboards.  So in lieu of an intermission between sets, he donates keyboards!

I’ve had the honor of videotaping the first three shows he did last year.  We then collected all the video that I recorded and that a couple others have helped capture and then went through it all to create the best promo mixes of the band so far.  I also got to go to his studio and his piano room at his house and record and interview him during rehearsals for the shows as well as mixing new material in the studio.  Ricky Z’s YouTube Page

He has recently just announced through press releases that he will be playing at the famed Stanley Theatre in Utica, NY during this year’s Boilermaker weekend!  A great honor for him and his crew that has worked so hard to put this show together. 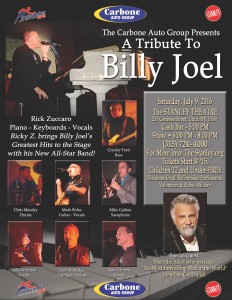